I had no idea what to expect when taking my seat for AWOL’s production of Going AWOL Unwrapped. I could never have predicted where the next 90 minutes (roughly) would lead.

Lydia Keating and Elizabeth Eaton (the show’s stars and our guides for the night) took us through France, Spain, Italy, Denmark, Holland and Germany on a whistle-stop tour of Europe, disposing of the dismembered limbs of their boss, whom they accidentally-on-purpose murdered. Sounds weird? It really was.

your head around the weirdness, Going AWOL Unwrapped was uncompromisingly silly, imaginative and surprising. Lydia Keating was fantastic as the prim and proper Valerie Silverston, chief editor at the Times. Elizabeth Eaton was perfectly matched as her comic sidekick, with the two fulfilling several other roles besides (including a bull, a crazed Scottish OAP and a hunky American journalist.)

The production’s use of props was inspired, and helped to give the audience a multi-sensory experience; at one point I could have sworn we were in the middle of the ocean, thanks to a simple spray of mist and a scattering of bubbles. 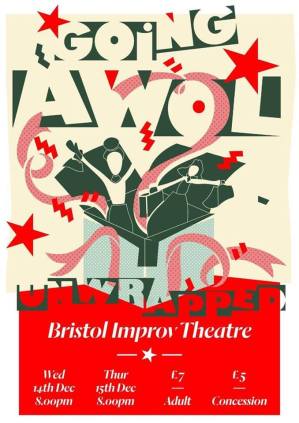 My highlights from the show included a very funny (and I couldn’t possibly know if it was accurate) portrayal of being high, thanks to a mistaken purchase of some brownies in Amsterdam. The arrival of a feisty Spanish bull also threw an interesting spanner in the works, as did the aforementioned hunky American journalist. When Valerie Silverston uttered the fatal words, “Fancy another holiday Miss Upshaw?” the craziness was amped up another level.

After the interval, things took a turn for the much weirder. Suddenly, we were in Lapland….*queue festivities.* I wouldn’t recommend bringing children to the show, as its ending may just ruin Christmas for them, but I’d definitely recommend it to anyone seeking a bit of fun and some easy laughter in an evening.

Kudos to Lydia Keating and Elizabeth Eaton for so magically and entertainingly taking us around the world, whilst all the time in the Improv Theatre’s incongruous setting in the backroom of a Polish Ex-Servicemen’s Club.