Harriet Dyer begins her spectacularly chaotic set at the Edinburgh Fringe with a short rendition of Black Box’s ‘Ride on Time’, accompanied by no backing music but some very enthusiastic dancing. Her show is linked by clips of 90s music which provides a slender sense of continuity, whilst the other themes mentioned in the description of her show are mostly lost. Nonetheless this is a fun, if random, hour of stand-up comedy.

Dyer is a likeable presence on stage; she is smiley and friendly and doesn’t shy away from engaging with her audience. The crowd at this particular performance was fairly small and unresponsive, but Dyer coped well and mostly succeeded in sustaining a good atmosphere. Her set consists of a series of unusual anecdotes which occasionally veer into the surreal or fantastical. She talks about her childhood in Cornwall, her family and her early experiences of doing stand-up. These all sound like fairly regular topics for a comedian, but Dyer puts her own unique spin on them and makes them different; she certainly cannot be accused of being unoriginal. 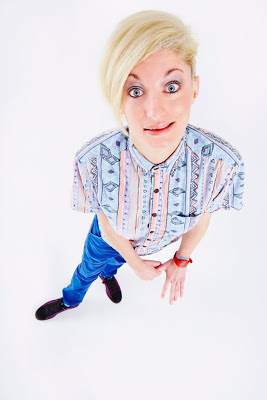 Due to the chaotic feel of her show, it can sometimes seem as though Dyer isn’t completely in control of her material. Her style of performing involves a lot of digressions and tangents, often during one anecdote, which can be off-putting. Some of these tangents work brilliantly – at one point she notes how the word ‘angst’ sounds like when a bus stops to let passengers on – but the less successful ones need to be reined in to make the set tighter. This would also help to keep the momentum going; at several points Dyer is forced to pause as she remembers the thread of her story. However, her talent for ad-libbing was clearly evidenced during this performance, from pointing out an audience member who looked uncannily like the demon headmaster to her confusion when a lady interrupted the show to look for a lost driving licence (‘I thought she said she was looking for ice cream’).

Overall, Dyer shows a lot of promise as a stand-up. She has a good personality for performing with a quirky charm and some cracking facial expressions to boot. ‘We’d Prefer Someone a bit More Mainstream’ is a bit too muddled, but with some refining would make a consistently hilarious show. And with the endorsement of comics like Sarah Millican already under her belt, this almost certainly isn’t the last we’ll hear of Harriet Dyer.